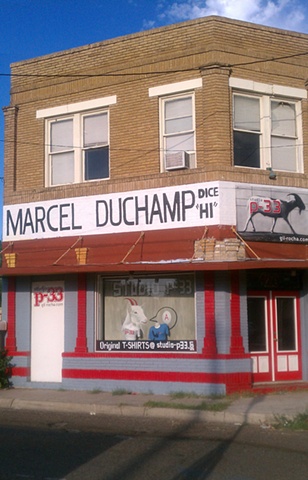 This particular installation piece began with my intent to converse in thought and through art (art as an arbitrary medium) with Marcel Duchamp. The idea, aside from not feeling so lonely in the studio, was to blur the state of consciousness in which time and space are linear. At first there was no response, but then I asked Duchamp if he could say anything to the people passing by my studio, what would he say? I promised I would write his statement so that everyone could see it. His response was "Hi". Not very creative, Mr. Duchamp, but that's okay. Since in my mind I had promised to write it on the wall outside my studio building, I did, late that night. I wrote "MARCEL DUCHAMP dice "HI". Dice in spanish means "says" ("MARCEL DUCHAMP says HI"). I posted a picture of the installation on facebook and the following day, a fellow artist friend made the comment that Duchamp was not a dice player, but a chess man. That comment inspired me to go back the following night and rework the installation from inside my apartment; listening and following Duchamp's lead.